In the last century, the simple and unsophisticated materials from cowhide, cork, length of yarn and rubber are the crucial components for a baseball. Despite technology innovations and breakthroughs, these league-quality baseballs are partly made using hands.

Baseball requires stitches to make sure it’s compact and easy to use. However, sewing stitches are simple and you can master easily.

If you are having the correct fabric to use, you should use a threaded needle for the right side of the fabric pieces where you are closing the edge between two facing sides.

The baseball should be looped with the needle towards each piece that comes together where you have to push into the right side. If you continue stitching on a baseball in the same manner, then stitches become hard for one to see, because they are having a thread of the same color as the fabric. However, they also resemble the stitching on your baseball.

However, for professional baseball, the stitches should be red to ensure that baseball is visible.

Depending on the place and time the baseball will be played, stitching on a baseball with red will make it visible. However, in the past, even baseball was stitched and they used to intertwin between the red and black laces and others blue with red. Until 1934, the adoption of waxed red stitching laces hasn’t been changed.

History of stitching on a baseball

Historically, since the mid-1800s, baseball was made varying in size, weight, shape and form different baseball manufacturers.

The early baseballs were from a rubber core from melted shoes and then wrapped in leather and yarn. So, the stitching started as early as during this time.

The pitchers were responsible to make their own baseball that they had to use on the game such that softened and coming was able to unravel while the game continued.

It was in the mid-1850s where the teams met so that they can attempt to standardizing the baseball. They planned in regulating the weight from 51/2-6 oz and also the circumference of 8-11 inches. The variations of the stitches were many because baseball is handmade.

Currently, the manufacturer is also using the rule set for stitching baseball. The stitches thread used should be waxy red and 108 stitches used.

Which material is made by baseball

For every baseball made professionally, it contains three parts. These parts include the round cushioned cork which is at the core, the cowhide that covers the ball’s exterior and the wool windings for the midsection.

For the pill, it’s a sphere that measures 2.06 centimeters in diameter. It’s usually made of rubber and cork composition material. However, it’s also encased with two rubber layers, the inner layer is black and outer is red.

The cushioned cork pill has four distinct layers of the poly/cotton and wool having concentric circles for varying thicknesses. It has four windings where the first has gray woolen yarn, while the second has white yarn, and third and fourth has gray and white respectively.

The reasons for choosing wool as the primary material to the baseball windings is the ability to compress pressure and it’s natural reliance.

A poly/cotton is used for adding strength and also reducing the risks of tearing.

Why Are Baseball Stitches Red

It seems that there is no answer as to why the baseball stitched should be red specifically. However, there are some guesses.

In the early time, before the 1900s, these baseballs were made from natural cowhide that was colored. Both American and National Leagues did add color after a century which was to help the batter see the ball approaching. 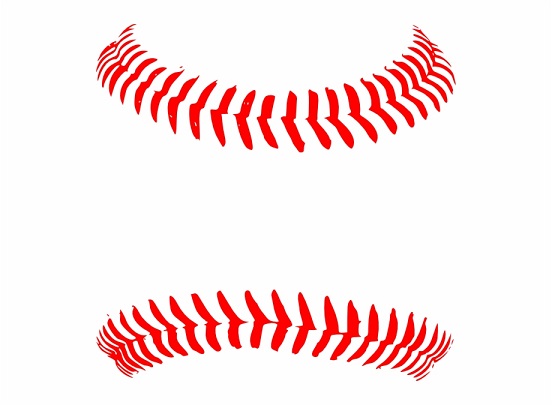 There was a time when the MLB announced that the baseball official color should be standard – red, that is when they ditched the blue and black color. From the moment, they threaded together and everyone settled on the chosen red color because it was much visible compared to the others.

It also looks like a good explanation after it’s given that MLB is the standard for the pitcher uniforms. So, according to the official Rulebook, the pitchers might not be having letters, insignia or numbers written on their sleeves. His gloves are also not white in color to avoid distractions.

What are the stitches on a baseball made of?

In any quality baseball, it has a letter covering that has been formed from the two peanut-shaped pieces that will be stitched together. These stitches that you find on baseballs are res-dyed threads that help to attach the two half sides of the baseball.

Stitches are essential in baseball because they play a crucial role in the trajectory because of the drag that results from the interaction between the air and stitching.

While controlling the stitches orientation and speed of the ball that it’s rotating will allow the pitcher to affect pitched ball’s behavior through specific ways. However, there are different types of pitches that will be included in baseball. For example, the slider, the curveball, the four-seam fastball, the two-seam fastball, the cutter, the changeup, and the sinker.

So, every baseball will need to have stitches because they are colored to help batters view the ball clearly. The stitches also help to mend the two half of the baseball.

These two figure-8 coverings will be stapled and hand-sewn using 88 inches of the waxed red thread. In this sewing process, there will be 108 stitches where the first and last would be hidden completely. Its a process requiring 13 – 14 minutes.

How many stitches on a baseball

When the two figure-8 covers are ready for making a baseball, they will be sewed to form a sphere. However, while sewing, the professionals have to use 88 inches of the thread that is waxed red. However, the worker has to use 108 stitches while sewing the cowhide pieces for the ball.

On the other hand, the first and last will always be hidden. So, you can’t see the first or last thread because they will be hidden completely.

While stitching, this process may take 15 minutes to be complete. For a final step, they use hand stitching. After that, this ball will run into a rolling machine for it to out the stitching surfaces.

After the baseball is done the final inspection, those that will be approved will be taken to market and be ready for use. The cowhide is used because it’s easy to manipulate.

How many stitches on an MLB baseball

The balls that are used for professional baseball games used to be rubbed using mud. It was applied before the start of the game such that it aimed at helping the pitcher grip.

All the baseball that qualifies for professional games, they should have 108 stitches. These stitches in the past were made of a mixture of blue or black. Currently, the stitches are from waxed red threads.

There are also different types of baseballs that they are played in the field. For Major Leagues, they use the ordinary baseball that is also called hardball.

Depending on the location, there are rubber baseballs that players use in high schools.

For all baseballs that are used in MLB baseball during the game or training are similar. Some of these balls are made with soft materials. So that one can play indoors, the baseballs are made from polyurethane material.

How many double stitches on a baseball

In the 20th century, the Major Leagues for baseball were using identical balls that were also markedly different. For the Official American League used blue ink while the National League was using black.

In the 1930s, Bob Feller the time he was a rookie at the National League, the baseball laces used to be black which were intertwined with a red color. The American Leagues, on the other hand, used to be blue and red.

When the Major League baseball decided to change the structure, it switched to ball specifications that are used on both leagues.

In the current rules, the Major League baseball weight should be weighing between 5-5.25 ounces and 9-9.25 inches circumference.

In baseball, it should have 108 double stitches which are also 216 stitches in total.

How many stitches on a major league baseball

All baseball for all Major Leagues is made the same. The reason is that they have the process they pass through that is similar. The few differences might take place because of the weight or size. But for stitches, they are supposed to be 108 in total. The reason is that while stitching, the one responsible does it by hand. However, as a rule, that has been used for long, the stitches have to be red in color.

While stitching, each standard baseball will need 88 inches of the red waxed thread for stitching. After the process, the first and last of the stitches won’t be visible because they will be hidden.

This is after 2000 when Major League Baseball was able to reorganize the structure of the baseball to the current specifications. Such that, the ball should have 108 double stitches which are 216 individuals.

why are there 108 stitches on a baseball

The baseball has 108 stitches and it’s the ball used by professionals. The reasons behind the 108 stitches are because of the measurements and procedure for making quality baseball.

While starting, the cowhide is cut as two figure-8 coverings which will be wounded to form the ball.

For one to sew this ball, they need a red waxed thread measuring 88 inches or about 223 centimeters. So, during the process of sewing the baseball, there will be 108 stitches but the first and last has to be hidden completely.

However, the sewing process is not simple, but for one baseball, it might require about 15 minutes to be complete.

When the stitched ball is complete, the staples have to be removed for inspection. It will undergo through the rolling machine within 15 seconds to ensure it has leveled the raised stitches. After that, the ball will be weighed and graded.

Why was red chosen for baseball stitches?

The choice of red color was because of contrast so that it will be easier to see the baseball. In some suggestions, they say that red doesn’t show dirt faster than the colors used before -blue and black – because it’s manufactured with iron oxide dye.

How do they make baseballs?

The material for making baseball on the exterior of this ball is cowhide leather. Yarn is also used to make stitches and then rubber-coated cork to complete the guts of the ball inside. However, the rubber center and cork are usually called “pill” in this baseball.

If you pick a baseball, the suggestion for its purpose immediately comes. You need to throw it fast while being accurate. For the pitcher, he uses his dance-like windup as he prepares to transfer momentum from the body to the ball. It’s an enjoyable game to play and watch.

Currently, there are many dozen baseballs that can be used in a professional game because of discoloration, scratches or undesirable texture occurring during the game. The balls might hit out of the park on various occasions and when the fan catches it, they will be donated freely or requested to return. The player might also give an autograph bat or other items for the exchange with that special ball.